After a first release before confinement, A Mermaid in Paris is back in theaters on 22 June. When the film was first released, Nicolas Duvauchelle and Marilyn Lima answered our questions.

A heartbroken siren and crooner. These are the roles played by Marilyn Lima and Nicolas Duvauchelle, the two stars of A Mermaid in Paris. This realization of Mathias Malzieu had a net start on 11 last March, four days before cinemas closed due to coronavirus. The latest film by the singer and writer is part of the productions on display for the reopening of theaters this Monday 30 June 2020. An impossible fairy-tale romance, A Mermaid in Paris is also an ode to panache and the power of the imagination in the face of a cynical and disenchanted world. In the casting, we therefore find Nicolas Duvauchelle, who finds here one of his rare light and luminous roles in his career. Seen in Skam and Bang Gang, Marilyn Lima finds here her first significant role in the cinema. A few weeks after the first release of the film, in March 1217, the two actors confided in an interview about this definitely unique film to play.

That what seduced you in this project of A Mermaid in Paris?

Nicolas Duvauchelle: The whole universe of Mathias [Malzieu, le réalisateur ndlr]. I read the script and after the book, it’s super surprising. It’s very poetic, that’s what I really liked. And then the idea of ​​being able to sing too, and there is this twirling side, of not stopping: playing the ukulele, rollerblading…. I felt a bit like Buster Keaton, on my scale. There was this slightly burlesque side, it was great to play.

What convinced me was Mathias above all. This meeting was captivating. And there is his whole universe: it’s not every day that you meet someone who is at the same time author, director, singer… He has plenty of caps, berets, hats (laughs). So her universe, this meeting… and then it’s not every day that you are asked to play a mermaid in a French film. It’s crazy, nobody can refuse that.

Playing for a director who is also a musician and a writer , what does it change in your work as an actor?

ND: Lots of things… He did everything at the same time, he wrote the book… and at the same time he decided to do the songs for Gaspard. Being able to rely on lots of tools like that, the songs, the book, on the screenplay, it was great! We not only have the whole world of Mathias and above all we had Mathias at our fingertips… and since Gaspard is a lot of Mathias, having him on a daily basis was important. I never saw him in a bad mood, he never sulked, he was always full of positive energy, it’s really nice to shoot like that. And above all, it gives momentum: when I composed the character, there was something very crazy about benevolence that came from him.

ML: He’s a multiple artist so finding yourself like that with an artist who has a lot of empathy, who understands the artists and who has an incredible sensitivity that brings a lot on a set. 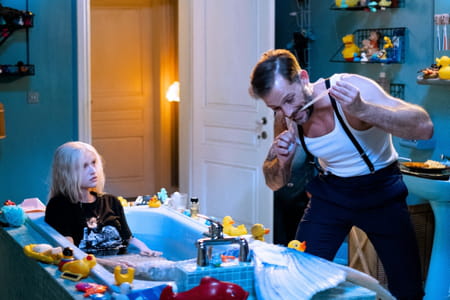 Marilyn Lima, you play a mermaid, Nicolas Duvauchelle, you wear the mermaid: concretely, how did the filming go? Was it difficult to act in this costume?

ND : I’ll let you start because we’re talking about fins…

: (Laughs) There are obviously constraints to being stuck in a bathtub, we know it’s going to be a little uncomfortable after a while… But I was very well surrounded. There were plenty of people present to check if the water was not too hot, if it was not too cold, etc. There was a lot of kindness. When you are freed from these constraints, you can play and you can immerse yourself in the character. But it was a constraint for both of them: this fin weighs seven kilos, once filled with water it’s torture to carry it, you can’t move…

ND: It was essential to see her in person, not to have a green thing with special effects that are added afterwards. To be able to see her, to have Marilyn with her fin, we were in it, we never left the film. And all the sets… there was no green background, we could touch and move everything, it was super exciting, to see this universe under our palpable eyes was great.

You play, but you also sing in A Mermaid in Paris. Was it a challenge to sing the compositions of Mathias Malzieu?

ND: Completely. That’s how we all started working together. A month and a half before shooting, we went to the studio and recorded the first song. Afterwards, there were tones to be found, harmony had to be found between Marilyn and me for the voices,… But it was such a deadly experience…

ML : Mortal is really the word.

ND: …and even seeing Mathias working and conducting, it was brilliant.

The film is an ode to the marvellous. Do you think the world currently lacks panache and poetry?

ND: It’s an understatement to say. I am quite pessimistic in life, unlike Mathias who is very optimistic. What I also liked was seeing a different universe, Mathias marvels at everything, all the time. He was hospitalized for a long time so I think it changes the vision and the relationship we have with the world… But it’s good to see someone like that, it also questions us. The more the fact of passing the tests like that, the less to take oneself seriously… do things seriously but while having fun!

ML: I think we constantly show the bad sides of things. They always try to take our brains to tell us that this planet is horrible, that there are so many disasters happening… But they forget to show us the beautiful things and the good things, as if they shouldn’t be shown. see to continue to be bad, to keep us in a state of permanent ill-being. That’s why this film is good to see and play because it’s all about love. And that’s life first. If there was one thing to remember from our time on this small earth, it is that we must love each other above all despite everything that is happening, and that love is what saves, no matter what happens on a daily basis. The film is about love and you have to talk about love… and show it… and live it (laughs).

A mermaid in Paris introduces the Surprisiers , “those whose imagination is so powerful that it can change the world”. As an actor, do you consider yourself to be Surprisers?

ML: (hesitates) Yes, we realize this with the reaction of people after the previews, when they say that they had a sweet and delicate moment after work and that we bring them magic. I think we’re a bit surprised by being an actor. In the evening, when you feel down and decide to watch a movie to relax, you say to yourself that it feels good. So obviously it’s part of being a Surpriser to be an actor. And even me in everyday life, I like to marvel at everything. Like Matthias, that’s why we loved each other from the start. And I try to convey a bit of joy to everyone, smile in the metro, ask someone you don’t know if they had a good day, etc. I think it’s a philosophy of life to be a Surpriser, and being an actor, you necessarily are.

First published on 22 March 2020 during the first release of A Mermaid in Paris, this interview was re-shared on the occasion of the return of the film to theaters on 22 June 2020.

Behind the scenes of Encanto with producer Yvett Merino

The Punisher: info on the Netflix series with Jon Bernthal

Alexander Payne: what does actress Rose McGowan accuse him of?